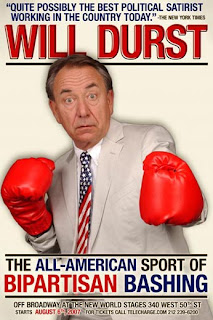 Sorry for the late post. This afternoon I attended the matinee performance of THE ALL-AMERICAN SPORT OF BIPARTISAN BASHING, a one-man show starring Will Durst, at the New World Stages Theatre at 50th Street in NYC. I had purchased the ticket for $27.00 through my membership in the Theatre Development Fund (tdf).
.
The show was in Theatre 5 at New World Stages (formerly Dodger Stages), one of the smaller theatres in the complex, and my seat was third row center.

Before hearing of this tdf offering I was not familiar with Will Durst, despite the fact that, according to his “Who’s Who In The Cast” entry, he has had more than 400 television appearances in 14 countries over the past 20 years, some of which were included in an onscreen montage before he appeared onstage.

Will had us in stitches as he proceeded to “bash” both parties in what appears to be an extended version of his night club stand-up act, living up to the New York Times’ view that he is “quite possibly the best political satirist working in the country today”. I am sure he would have been a regular on “The Smothers Brothers Comedy Hour” had he been performing 40 years ago.
While there was Democrat bashing (“The reason the Democrats are so intent on passing a stem cell bill is they're depending on the research to grow themselves a spine”), the Republicans took it on the chin much more – hey, consider the material available – partially because of his self-professed “centralist” leanings.
.
As with similar political commentary shows, like CAPITAL STEPS, the material changes slightly each performance, depending on the news of the day. At one point Will perused the newspapers and magazines of the past few days and commented on particular stories.
.
In the playbill Will thanks his writers "without whom none of his trenchant yet pithy diatribes would be possible", including the 435 members of the House of Representatives, the 100 members of the US Senate, the President, Vice-President (especially the Vice President), both of their families and staffs, etc, etc, and points out that his performances are made possible by the First Amendment.
.
As the audience began to file out after the curtain calls I noticed that Will came out from backstage to shake hands and autograph playbills.
The bottom line is two thumbs up from me. It was certainly worth the 10-block hike in the summer heat (although not so bad this afternoon). Go see Will if you get a chance. Besides being a gifted satirist it appears that he is also a fellow lover of medium rare cheeseburgers (extra grease, please)!
After the show I returned, after a long absence, to the Mont Blanc Restaurant on 48th Street for dinner, now across the street from its former location due to high rise construction. I was assured that it was the eatery I thought it was when hostess Maria verified my memory of the Tattoo-esque (think FANTASY ISLAND) former head waiter. I had what had in the past been my usual of Escargot, Veal Cordon Bleu, delicious Potato Pancake, and Chocolate Mousse (I did not have the cold Vichyssoise soup to keep the bill manageable – as it was it was almost 2½ times the cost of the theatre ticket, par for the course in midtown Manhattan; it looks like hot dogs and cold cereal for dinner next week). I was surprised that the bartender could not provide me with a Stinger – perhaps next time I will add him to the list of bartenders whom I have taught how to make one.
TTFN
Posted by Robert D Flach

[2] The only specific urban myth which I didn't see in your list is the so-called "slavery" credit which has misled a number of African-American taxpayers.