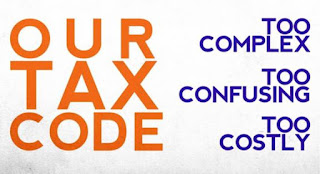 There is no question that tax “reform” is needed.

Not because the middle class is paying too much tax and the “wealthy” are not paying enough tax – which may or may not be true (I tend to lean toward it not being true).  But because the United States Tax Code is truly a convoluted “mucking fess”.

The purpose of the federal income tax is to raise funds to run the country.  Period.  It is not to “redistribute wealth” or to distribute social welfare benefits or to reward campaign contributors and generous lobbyists or to provide specific benefits to specific industries or professions.

The US Tax Code must be reformed to simplify the reporting of income and payment of taxes.  And to remove all the inappropriate “loopholes”, benefits, and “expenditures”.  I have outlined my “Principles of Tax Reform” at my website A TAX PROFESSIONAL FOR TAX REFORM.

If it is thought that the “wealthy” do not pay enough taxes, in proportion to the amount paid by the “un-wealthy”, then the solution is not to punish ambition and success by excessively taxing incremental income but to remove in total from the Tax Code all inappropriate “loopholes”, deductions and credits that cause the wealthy to avoid taxes.

As for whether the “wealthy” are paying their “fair” share of taxes, here is information from IRS reports for tax year 2015 -


Obviously, the fairest, and simplest, tax system would assess a single rate – 10% or 15% - on gross income (reporting net capital gain, self-employment and rental income) in excess of a basic Standard Deduction per taxpayer (a base number for Single filers which would be doubled for married taxpayers filing a joint return) and a Personal Exemption amount per dependent that would apply equally to all taxpayers in all levels of income with no other deductions or credits allowed.

The Pennsylvania state income tax, for example, is a flat 3.07% tax on all gross income.  However, it does not allow for net business or net investment losses, a standard deduction, or personal exemptions.

But I expect it would be impossible to enact such a simple federal income tax system.  And certain deductions are appropriate to encourage saving and investment and to, in my opinion, “geographically equalize” income.

What we know of the “cocktail napkin scribblings” that is the Administration “framework” for tax reform touches somewhat on what should be done – but much, much more work needs to be done to properly “reform” the US Tax Code.