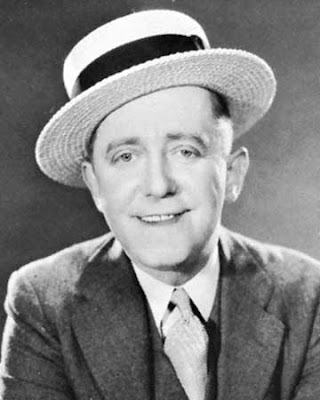 George M Cohan was a playwright, composer, lyricist, actor, singer, dancer and producer who started out Vaudeville with the family act known as “The Four Cohans”. According to Wikepedia he was "Known as 'the man who owned Broadway' in the decade before World War I, he is considered the father of American musical comedy”.

Appropriately his life was made into the Broadway musical GEORGE M!, which was Joel Grey’s follow-up to CABARET. GEORGE M! also starred a young Bernadette Peters as Cohan’s sister.

His life story had previously been brought to the big screen in the classic YANKEE DOODLE DANDY with James Cagney. This movie is usually shown each year on July 4th on TCM or elsewhere. BTW, Cagney reprised the role of GMC for a guest appearance in THE 7 LITTLE FOYS, with Bob Hope as Eddie Foy. And, correct me if I am wrong, but I do believe that Eddie Foy himself appeared briefly as himself in YANKEE DOODLE DANDY.

GMC was famous for the line “My mother thanks you. My father thanks you. My sister thanks you. And I thank you”, which was addressed to the audience at the end of the family’s Vaudeville act.
.
Among the many songs written by GMC are "Give My Regards to Broadway", “The Yankee Doodle Boy” (“I’m A Yankee Doodle Dandy”), “You're a Grand Old Flag", "Forty-five Minutes from Broadway", "Mary Is a Grand Old Name" and “Over There". He also taught us how to spell H-A-RR-I-G-A-N.

George M is still represented on Broadway in the form of a statue in the middle of Times Square.

FYI, while he always said he was “born on the 4th of July”, according to his Wikepedia profile a baptismal certificate indicates that he was actually born on July 3, 1878.

The “Cohan Rule” refers to the decision in the federal court case Cohan vs. Commissioner, 39 F. 2d 540 (2d Cir. 1930). This case resulted from one of the first IRS audits. The IRS disallowed Cohan’s deductions for business travel citing Internal Revenue Code Section 162. Under IRC 162 a taxpayer must establish that an expense was (1) paid or incurred for (2) business or profit-oriented purposes and (3) the amount spent.

Fred W. Daily explains the situation in his copyrighted article “Getting Audited? Can't Find All Of Your Records? No Problem”.

“The IRS took the position with Mr. Cohan that even if he could convince an auditor that the business expense qualified for a deduction (satisfy number 1 and 2), that he also must be able to fully document the amount spent (number 3). George replied that he was always on the run, and had little time to document many of his expenses. George challenged the IRS stringent record keeping requirements in court. His lawyers argued that the IRS was wrong because even though records were missing, George had presented other credible evidence of the amount of the expenses on which approximations of the true amounts could be made.

George had explained the necessity of the (undocumented) expenses and offered his recollections and approximations of the amounts incurred. The items ran from cab rides and tips to large hotel and restaurant expenses for George and his entourage. The Federal Appeals Court, in an opinion by the aptly named Judge Learned Hand, held that the sums were allowable business expenses. It was unreasonable of the IRS not to allow, at least some of his earnings, not to be based on Cohan's approximations.”

“Anyone may arrange his affairs so that his taxes shall be as low as possible; he is not bound to choose that pattern which best pays the treasury. There is not even a patriotic duty to increase one's taxes. Over and over again the Courts have said that there is nothing sinister in so arranging affairs as to keep taxes as low as possible. Everyone does it, rich and poor alike and all do right, for nobody owes any public duty to pay more than the law demands."

What the Cohan ruling says is that since GMC travelled the country to produce and appear in theatrical productions, which was public knowledge via programs and newspaper accounts, it is reasonable and appropriate to assume that he must have incurred certain deductible expenses.

Under the Cohan rule if there is no documentation, but other evidence clearly indicates that some deduction should be allowed, the court may come up with its own estimate. As the Fifth Circuit held, “if a qualified expense occurred, . . . the court should estimate the expenses associated with those activities”.

Over the years Congress has, by statute, required more detailed documentation for certain types of expenses in order for a deduction to be allowed – such as business travel and entertainment, business gifts, listed property (autos, computers, cell phones, and certain entertainment property), and, most recently, charitable contributions.

Is the Cohan Rule still a credible “defense” today? It appears so, as per the item from last Saturday’s BUZZ where it was applied not to business expenses but to charitable contributions.

In an August 2008 blog post from RUBIN ON TAX titled “Is There Life Left In the Cohan Rule” author Charles Rubin refers to the article “Cohen Rule Still Secures Some Deductions Despite Statutory Limits” by Paul G. Schloemer from Practical Tax Strategies. Schloemer conducted a survey of tax cases where the Cohan Rule was invoked to see if the rule still had viability. Rubin tells us, “Happily, he reports that the rule is alive and well”.

Rubin pointed out that –

“Mr. Schloemer notes that there are two key variables that courts will look for in allowing a taxpayer to rely on the Cohan Rule. The first is that SOME documentation will be needed - oral testimony alone probably will not cut it. The second variable is the veracity of the taxpayer's testimony, since the court will need to have some level of trust in the taxpayer's assertions before it will allow deductions under the rule.”

Despite the fact that this “out” exists, you should not use it as an excuse not to keep good contemporaneous records and maintain detailed documentation of all your business expenses.

TTFN
.
OOPS! THE REFERENCE TO THE COHAN RULE APPEARS IN TOMORROW'S (WEDNESDAY EDITION) BUZZ - IT WAS NOT IN SATURDAY'S BUZZ EDITION. MY BAD
Posted by Robert D Flach