FALL INTO THE GAP! 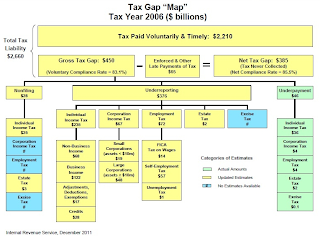 The Internal Revenue Service has released a new set of tax gap estimates for tax year 2006.  The $300 Billion number for net uncollected tax that we had been using now looks like closer to $400 Billion.


“The new tax gap estimate represents the first full update of the report in five years, and it shows the nation’s compliance rate is essentially unchanged from the last review covering tax year 2001.


The IRS suggests taxpayers did not pay $450 Billion on time in 2006. The tax agency eventually collects around $65 Billion was collected via audits and late payments.  The result is a net tax gap for 2006 of $385 Billion, $95 Billion higher than the $290 Billion previously estimated for 2001.


The increased gap is largely due to “the growth in total tax liabilities. In addition, some growth in the tax gap estimate is attributed to better data and improved estimation methods.”


According to the Service -


"As was the case in 2001, the underreporting of income remained the biggest contributing factor to the tax gap in 2006."


•Underpayment of tax increased to $46 Billion, up from $33 Billion in the previous study.


“Overall, compliance is highest where there is third-party information reporting and/or withholding. For example, most wages and salaries are reported by employers to the IRS on Forms W-2 and are subject to withholding. As a result, a net of only 1 percent of wage and salary income was misreported. But amounts subject to little or no information reporting had a 56 percent net misreporting rate in 2006.”


So increased 1099 reporting is to be expected, which has already begun with the new Form 1099-K.


The biggest single component, representing 27% of the $450 Billion estimate, is “business income” for individuals (on the Form 1040), which accounted for $122 Billion of the under-reporting amount – and area where there is minimal third-party reporting.  “Small corporations” (assets less than $10 Million) under-reporting was only $19 Billion.  I expect most of this is from under-reporting on Schedule C.


There is no doubt from these findings that Schedule Cs will be an audit target, especially those with consistent losses.


However – I still believe it is bad advice to tell ALL taxpayers who have a Schedule C business to incorporate.


“The decision to incorporate a business requires careful review of all the specific facts and circumstances of the individual situation. And taxes are not the only consideration. In a majority of cases it is not financially beneficial, either in the short or long term, to incorporate.


While incorporating will certainly reduce one's 1040 audit risk, it is very often not the best idea for the average sole proprietorship. Incorporation can generate much more paperwork, recordkeeping, federal and state tax filings, costs, and general all-round "agita" than it is worth.


The advice that one should incorporate solely for the purpose of avoiding an audit seems to me to be saying, ‘If you want to cheat on your taxes you can incorporate and the IRS will not audit you’. It is not good tax or financial advice.


An IRS audit is not something that should be avoided at all costs. Tax returns should be prepared, and decisions about choosing a business entity should be made, in such a manner as to generate the absolute least amount of federal, state and local taxes (income and payroll) within the parameters of federal and state laws. If you will pay less tax (income and payroll), fees and other costs by filing a Schedule C you should do so, honestly and ethically, and not worry about being audited.


If you are reporting all of your income, deducting only legitimate and documented expenses, and keeping good records then any audit should result in “no change”.

PS - Click here to see a larger version of the above map.

We live in a day and age of information at your fingertips, instant messaging, live around the world news updates, internet the speed of light, little tablets with books and apps, rocket ships, little race cars on Mars, etc, etc, and the financial part of our government is working with 6 year old stats and making it sounds like it just happened yesterday.

Just passing along some interesting reading for you, especially the GAO reports on the side bar

I bet I din't leave the link to what I was talking about in my previous message to you... LOL