WHAT’S THE BUZZ, TELL ME WHAT’S A HAPPENNIN’

Today's BUZZ is so meaty!
* Tax pros, PLEASE check out the December “issue” of THE TAX PROFESSIONAL and let me know your comments on my “Soapbox” editorial.


* On Thursday two of my articles appeared at MAINSTREET.COM -


* Also at MAINSTREET.COM - “You Won't Guess The Most - and the Least - Corrupt States in America” by Robert McGarvey.  Surprisingly, it’s not New Jersey! 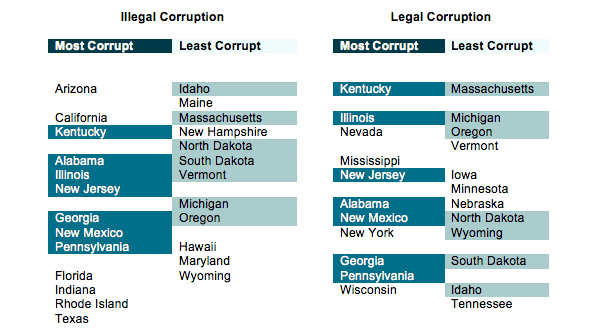 “You knew New Jersey ranked near the top of the most corrupt states in America. Everybody knows that. But did you know that, hands down, the state with the most criminal corruption involving elected officials is Arizona?”


The least corrupt - Massachusetts and Vermont.


There is illegal corruption and “legal” corruption (NJ is high on list of both).  “Legal” corruption is defined as “the political gains in the form of campaign contributions or endorsements by a government official, in exchange for providing specific benefits to private individuals or groups, be it by explicit or implicit understanding.”


Click here for the actual report referenced in the article.
* Any takers for $1.00 tax guides from MY DOLLAR STORE?  They make great stocking stuffers for adults.


* There is a new timely post up at BOB’S BABBLINGS – it discusses using “Debit Cards vs Credit Cards” when it comes to online holiday shopping (actually online shopping at any time of the year).


* Jason Dinesen embarks on a series of posts to elaborate on the items he listed in his previous post “5 Things About EAs” with “We’ve Been Around Since 1884” followed by, perhaps the most important “thing”, “We Don’t Work for the IRS”.


“2014 marked the 130th anniversary of the Enrolled Agent designation, but the anniversary passed with little fanfare.”


The EA designation was created in legislation “informally called the ‘Horse Act’.”  Originally the Enrolled Agent acted as an agent on behalf of a citizen claims against the government for lost horses and other property damage during the Civil War.


Many, myself included, feel that the name Enrolled Agent should be changed.  Jason says –


* Need more proof that (1) refundable tax credits are a magnet for fraud and should be banned from the Tax Code, and (2) the Tax Code should not be used to distribute federal welfare payments?  Just read “IRS Urged to Crack Down on Improper EITC and ACTC Payments” by Michael Cohn at TAXPRO TODAY (highlights are mine – and fyi, ACTC stands for the Additional Child Tax Credit, which can be refundable) -


* E. Hans Lundsten and Joseph Marion, III explain how “Saving for College is Also Good for your Estate Plan” at JDSUPRA BUSINESS ADVISOR.


Click here for highlights of the report and here for the full 320 page report.


I will continue to refer to the members of Congress as idiots as long as they continue to act like idiots – but I will also acknowledge a Congressperson who actually says something smart (a rarity).  The CCH piece quotes Coburn as correctly stating –


“Ideally, Congress would throw out the entire tax code and start over, but at the very least the code should be made simpler, fairer and flatter.”


* I agree with Joe Kristan, who, in a response to my post on Donor-Advised Funds included in his Wednesday “TaxRoundup, 12/10/14: Extender bill lives, permanent charitable extender bill doesn’t. And: don’t just buy it; install it!” at the ROTH AND COMPANY TAX UPDATE BLOG, said -


“For at least 99.99% of taxpayers, these are far better than setting up a private foundation.”


* Tax Mama Eva Rosenberg deals with the question “How Old Do You Have to Be to File Taxes?” at EQUIFAX -


“Is there an age limit when it comes to paying taxes? No. Age has nothing to do with taxes; it’s all about income.”


I have dealt with this question from a different perspective over the years – “How Old Do You Have to Be to Stop Paying Taxes?”  The answer is the same.


* While we are still waiting for the idiots in the Senate to pass an extender bill, we hear from Laura Prabucki and William La Jeunesse of FOX NEWS POLITICS that “Congress Prepares to Extend Tax Breaks for Horse Owners, Film Industry and More” –


“While you might lose money betting on the tracks, some race horse owners are making millions -- and with the help of the U.S. tax code, they can write off the cost of their thoroughbreds.


That's just one of 55 tax "extenders," worth up to $44 billion, currently being debated by Congress.”


The House has extended for one year ALL of the “tax extenders”.  While we hear about the “extenders” that affect the 1040 – the deductions for educator expenses, tuition and fees, and state and local sales tax among them – the full list includes loopholes for specific business activities.


I certainly agree that many of these specialized loopholes should not be in the Tax Code – including the 1040 deduction as mortgage interest for mortgage insurance premiums – and really should not be extended.  But at this point there is no time for the idiots to pick and choose, with those members whose pockets are lined by the recipients of the individual specialized loopholes wasting more time fighting to keep the loophole that they are paid to champion, regardless of its “appropriateness”.  Just vote them all in or all out and be done with it.