WHAT’S THE BUZZ, TELL ME WHAT’S A HAPPENNIN’ – TUESDAY EDITION

“Light travels faster than sound.  This is why some people appear bright until you hear them speak.”


I enjoyed a matinee performance of Jason Robert Brown’s THE LAST FIVE YEARS on Sunday at the Shadowland Theatre, an intimate equity venue in Ellenville NY.  It tells the story, in song only, of the 5-year relationship of novelist Jamie and actress Cathy.  Jamie tells the story chronologically and Cathy tells it from end to beginning.  There are two week-ends left to catch this show.  Two thumbs up!


* Just a reminder – today (September 15th) is the day to mail out your 3rd Quarter federal and state estimated tax payments.


Kelly quotes from the letter –


“The undersigned organizations, representing millions of individuals, employees, businesses of all sizes, community development organizations and non-profit organizations, urge Congress to act immediately on a seamless, multiyear or permanent extension of the expired and expiring tax provisions, including appropriate enhancements. These tax provisions are critically important to U.S. jobs and the broader economy.


Failure to extend these provisions is a tax increase. It will inject instability and uncertainty into the economy and weaken confidence in the employment marketplace. Acting promptly on this matter will provide important predictability necessary for economic growth.


The expired provisions should be renewed as soon as possible this year. We urge all members of Congress to work together to extend seamlessly on a multiyear basis, and where possible enhance or make permanent, these important tax provisions.”


As the letter states, the idiots in Congress need to shit or get off the pot.  Waiting until the very last minute causes problems for the IRS, tax preparers, and taxpayers.


It is especially important that if the ability to make a direct transfer from an IRA to a charity as satisfaction of an RMD be passed ASAP so taxpayers can actually take advantage of this benefit.


* Prof Jim Maule likes to post when he finds “interesting tax topics when I watch television court shows”.  His most recent post is “Tax Client and Tax Return Preparer Meet Up in People’s Court”.


I do not watch tv court shows.  Let’s face it, the cases on these programs are not chosen because they highlight an interesting or important point of law.  These shows are part of the disturbing trend in tv programing in which the main purpose is to humiliate stupid people who abandon all self-respect for their 15 minutes of fame (a good description of anyone who voluntarily participates in so-called “reality tv”).  The “adversaries” on these tv court shows are usually idiots – and their idiocy is further proven by their decision to appear on these shows.  To be honest, I am surprised that Prof Maule watches them.


Anyway, that said, here is the issue covered in the “trial” (highlight is mine) – the tax preparer claims the client “had asked him not to report the lump-sum payment on the state income tax return”.


The taxpayer does not determine if a distribution is taxable and should be reported on the federal or state tax returns – federal and state tax law does!  The tax preparer is a fool.  If the amount was indeed taxable, and I am not going to say whether it was or not as I do not know all the facts and circumstances, the tax preparer is obligated to include it on the return.  If the taxpayer/client did not want to report it, and it was indeed taxable, she should have been told to go elsewhere.


And when the taxpayer received the underpayment notice from the state she should have contacted the tax preparer immediately, before making any payment to the state.


In his bottom line Professor Maule tells us “there are so many lessons to be learned from this episode”, and goes on to list them.


* Yesterday (Monday) Joe Kristan’s week-day daily Tax Roundup at THE ROTH AND COMPANY TAX UPDATE BLOG discussed as his opening topic new pending legislation aimed at combatting identity fraud and tax refund fraud that includes a provision that gives “the Treasury Department and the IRS with the authority to regulate all aspects of Federal tax practice, including paid tax return preparers, and overrides the court decisions” in Loving vs IRS.


As Joe correctly points out (highlight is his) –


“Of course, increasing preparer regulation does absolutely nothing to fight identity theft.”


“They plan to Mark up the bill Wednesday morning.  Contact your senator and representative to oppose this IRS power grab on behalf of its friends Henry and Richard.”


* Kelly Phillips Erb also weighs in on this issue in “Congress May Give IRS Authority To Regulate Tax Preparers” at FORBES.COM.


Kelly correctly observes (highlights are mine) -


“It’s my feeling that the bad guys are the bad guys: forcing you to take ethics courses doesn’t change that. Incompetent and lazy preparers are incompetent and lazy: forcing someone to sit through continuing education courses (likely while text messaging, trust me, I’ve been a speaker at these things) doesn’t make that person smarter or more conscientious. The reality is that smart, competent tax professionals do the right things already. But that doesn’t make for good press. So, instead, we add more layers.”


Even if this law passes, and I do not think it will, it will not affect the 2016 filing season (for filing 2015 tax returns).  As with the previous failed RTRP program it will take several years to phase-in. 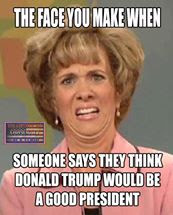 
Finally a Presidential candidate who has the courage to call a spade a shovel.
Louisiana Gov. Bobby Jindal correctly observed “Donald Trump is not a serious candidate.”
He perfectly described Trump as “an unserious and unstable narcissist” and a “circus act”.

No matter who is President of the U.S., things won't be significantly different.