VOTE FOR ME AND I'LL SET YOU FREE! 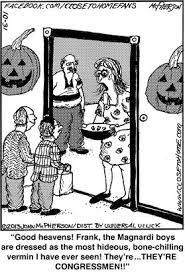 While this is a tax blog, this is technically not a post about taxes – although, as you will see, there is a tax component.  I just thought I would outline my positions on the current Presidential race.


It is appropriate that I post this on Halloween – as it is a holiday known for scary stuff and “trick or treat”.  Politics, and politicians, are often scary, at least to me, and it is a proven fact that politicians and political candidates provide us with more “tricks” than “treats”.


FYI – my family was politically unique.  They were admittedly registered Republicans in corrupt Democratic machine stronghold Hudson County NJ (think Frank Hague and John V Kenny).  Obviously nobody in my family worked for any component of city, county, or state government.


I moved from “blue” NJ (Garden State residents are often “blue” in several senses of the word) to “red” rural PA a few years ago.  My first time voting as a PA resident was the 2012 presidential election.


As I introduced myself to the “panel” at my polling place and was signing in the Republican “challenger”, who had overheard that I was a new PA resident, came over to welcome me, publicly announcing (I assume jokingly) –


“Here in Pennsylvania the Republicans pay $20.00 per vote.”


Democratic voters in Hudson County were also told to vote early and vote often, and to remind deceased relatives to do the same.


I was not upset or offended by the challenger’s greeting, and accepted it as a joke.  But I couldn’t help thinking that if he had said that to me at a Jersey City polling place he would have been promptly physically evicted, and possibly taken to jail.


I sympathize with those who are disgusted with professional politicians, which has led to the popularity of and support for Ben Carson, Carly Fiorina, and, unfortunately for the Republican Party and the country, narcissistic buffoon Donald Trump.  I could support a “non-traditional”, “non-politician”, “political outsider” candidate, although I would obviously never, ever even consider supporting Trump for any elected office.  I have not studied Carson or Fiorina enough yet to be able to make any decisions about them.


I acknowledge that Congress is full of incompetent idiots (I rarely discuss Congress without using the preface “idiots in”), and would very likely not support any member of Congress for President.  The idiots in Congress cannot get anything done because they are incapable of compromise and incapable of independent thought.  Each year we see many articles that have identified the current Congress (in office at the time of the article) as the worst and least productive in history.  If I were to support a “professional politician” I would much prefer a Governor over one of the idiots in Congress.

I am skeptical about another Bush in the White House.  I do not recall having any complaints about the elder Bush, but Dubya was the worst President in my lifetime, despite the so-called "Bush" tax cuts.  When it comes to clan Bush I would rather be safe than sorry.


I most certainly would not support any candidate who supports the religious right, and its champions the Tea Party.  I truly believe the Tea Party is dangerous.  I oppose all efforts to legislate, or oppose legislation based solely on, the specific, individual religious beliefs of any one religion or religious group.


Calling America a “Godless country” is not a criticism.  It is a statement of fact.


I am a tax professional, so the tax proposals of the individual candidates interest me.  I believe the US Tax Code is a mucking fess and should be completely shredded and rewritten from scratch, with simplicity and fairness as the main ingredients.


I believe the one and only purpose of the Tax Code is to raise the money necessary to run the government.  The Tax Code should most definitely not be used to “redistribute wealth” or to deliver government social welfare or other benefits.  I also do not believe that we should excessively tax the rich simply because they can afford it.  I oppose a tax system that punishes ambition, entrepreneurship, and just plain hard work, and support one that encourages saving and investment.  I would support a flat tax.  So therefore when it comes to taxes I prefer the Republican point of view over that of the Democrats.


Along those lines I also do not support most extreme left socialistic policies.


That said, I do not automatically dismiss Hillary Clinton, although she would certainly not be my first choice for President.  To be honest, my reason for not dismissing Hillary is more because of her husband then because of her beliefs or credentials.  While I did not necessarily agree with all his federal income tax policies, I will admit Slick Willy was a smart and relatively good President.  We had a budget surplus under Clinton.  His contributions and accomplishments were limited because of having to devote too much time to dealing with the persecution by Kenneth Starr and Newt Gingrich.  When it comes to infidelity and sexual misconduct, the only difference between Clinton and the majority of politicians, both past and present, is that he got caught (and his taste was a bit questionable).  I actually do believe that 9/11 might possibly have been avoided were it not for Kenneth Starr.


So there is where I stand on the Presidential candidates, just in case you were interested.  Any comments?

I pretty much agree with you right down the line Kasich is looking pretty level headed at the moment.