DEALING WITH THE GOP TAX ACT 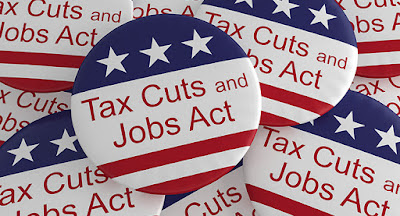 The 2018 Form 1040 was the first tax return filed with the changes enacted by the GOP Tax Act.  Many taxpayers were surprised, and some shocked, with the bottom line of their 2018 federal tax returns.

In “Dealing With The GOP Tax Act” I explain the differences between the new law of the GOP Tax Act and the “old” tax law and discuss what you can do in 2019 to pay the absolute least federal income tax possible under the new tax law and avoid surprise and shock when preparing your 2020 tax return next year.

Send your check or money order for $2.00 or $3.50, payable to TAXES AND ACCOUNTING, INCORPORATED, and your email or postal address to –

TAX PLANS OF THE DEMOCRATIC CANDIDATES

In light of the Democratic debates tonight and tomorrow night Kiplinger.com looks at the “Tax Plans for All 24 Democratic Presidential Candidates”.

Assuming Trump lasts until 2020, I will most definitely vote for whoever gets the nomination of the Democratic Party.  Not because I am a staunch Democrat or liberal but because I am an intelligent and patriotic American.  However, I reject the ongoing Democratic theories, included in the tax plans and discussions of these candidates, that the solution to all our ills is to “tax the rich” simply because they can afford it, and that the US Tax Code should be used for social engineering, to redistribute wealth, and to deliver federal welfare and other government benefits.

With one exception, nothing in any of the tax plans or proposals of the Democratic candidates that have tax plans or proposals is new or innovative.  Most if not all of them want to expand the Earned Income Tax Credit and to increase tax on higher income taxpayers, either by increasing the top rate of adding a special “wealth surtax”, capital gains, and corporations.

The Earned Income Tax Credit does not belong in the Tax Code.  And I do not support punishing ambition, entrepreneurship and success.  The way to make corporations and the wealthy pay more tax is not to increase the tax rate, but eliminate all the truly special-interest tax breaks and loopholes.

The one new and innovative item, something I have not seen elsewhere or thought of myself, is from Rep Eric Swalwell, who proposes allowing employers to make tax-free payments toward their workers’ student loans.  A good idea.

Of all of the currently 24 whose hats are in the ring, my preference for the Democratic candidate in 2020 is Joe Biden.  However, I most strongly oppose his plan to eliminate the step-up in basis for inherited capital assets.  Tax policy and financial considerations aside, this would be a nightmare for taxpayers and tax preparers.

FYI, I wrote about my thoughts on tax reform in “The Tax Code Must Be Destroyed”.

Normally, except for 2020, elections should not be decided on one issue alone.  The 2020 Presidential election is the rare exception, and it has nothing to do with taxes or any other area of policy.  The one and only issue of 2020 is removing Donald T Rump from the White House.

NO, NO. A THOUSAND TIMES NO!

* The Taxpayer Certainty and Disaster Tax Relief Act (H.R. 3301) would extend through 2020 some 40 tax provisions that expired or are about to expire and provides disaster tax relief portion, funded by ending the Tax Cuts and Jobs Act's estate tax exemption in 2022 instead of in 2025.

* The Promoting Respect for Individuals' Dignity and Equality (PRIDE) Act of 2019 (H.R. 3299), would permit same-sex married couples to amend their filing status for income tax returns with respect to which the statute of limitations has already passed.

All three bills received votes primarily along partisan lines. There is no indication if and when the legislation would reach the House floor for a vote.

I certainly support the Senate Republicans promise that the extenders package is "dead on arrival".  I oppose the extension of these tax benefits – and most certainly if the extension is retroactive to 2018 (not sure if they are in this bill).  Having temporary tax benefits that are constantly extended is truly stupid.  And creating tax deductions and credits that are retroactive to a prior tax year whose returns have already been filed creates problems and agita for taxpayers, tax preparers and the IRS, as well as for state tax agencies.

I also strongly oppose expanding the Earned Income Credit and making the Child Tax Credit fully refundable.  The EIC does not belong in the Tax Code, and I oppose ALL refundable credits.  The Tax Code should not be used to distribute federal welfare benefits, and refundable credits in general are a magnet for tax fraud.

I have no problem with promoting respect for individuals' dignity and equality.

Senate Republicans have announced their opposition to all of the bills.

So, what do you think?

The BUZZ is a day early this week.  As you read this, I am on an escorted motor coach trip to New Hampshire with the Hawley Women’s Club.

* The final word is out on the feeble attempts by some states to work around the state and local tax deduction, aka SALT, limitation, according to “IR-2019-109: Final Regulations on Charitable Contributions and State and Local Tax Credits” -

“The U.S. Department of the Treasury and the Internal Revenue Service today issued final regulations that require taxpayers to reduce their charitable contribution deductions by the amount of any state or local tax credits they receive or expect to receive in return.”

As explained in the article “IRS Stops NJ's Attempts To Bypass Trump Tax Law” from PATCH.COM -

I knew this scam by NJ and other states would not work.

* The TURBO TAX BLOG celebrated National Children’s Day with “Here’s What Having a Child Means For Your Taxes”.

You should know these rules if they apply to your situation.  Even if you use a tax professional, the more you know the better prepared you will be to give your tax pro all the information needed to properly and correctly prepare your returns and the quicker your returns will be completed.  And if you attempt to use a box to self-prepare your returns remember “garbage-in, garbage out”.  If you don’t know the correct information to enter on the software you will not get a correct return.

“The Attitude Survey offers some interesting understandings on how taxpayers view the IRS and fellow taxpayers. It provides many findings about taxpayer needs and preferences – and what taxpayers value.”

One of the “takeaways” from this survey –

“As taxes get more complex, the more the tax pro is needed.”

* Wonder of wonders, miracle of miracles.  In a truly rare event these days, considering the obstructionist position of despicable Senate Majority Leader McConnell, a bill has actually passed both the House and the Senate!

The Taxpayer First Act “contains a host of provisions designed to modernize the IRS, in areas such as customer service, taxpayer rights during the enforcement process, information technology, identity theft protection and electronic systems.

For example, there are provisions to exempt low-income people from the IRS's private debt collection program, establish an independent appeals office, and provide identity theft victims with a single point of contact at the IRS.”

If only New Jersey would pass a bill to make the NJ Division of Taxation act more ethically toward NJ taxpayers.

* A final reminder for tax pros to check out and share my free newsletter THE TAX PROFESSIONAL.  And everyone should check out the latest post at TRUMP MUST GO.

Republicans with intelligence and a conscience - there must be some still out there - need to work aggressively to encourage and support primary challenges to Trump and his hypocritical supporters and defenders.

THE TRUTH, THE WHOLE TRUTH, AND NOTHING BUT THE TRUTH!

The 2020 presidential election has absolutely nothing to do with politics.

It is not about conservative vs liberal.

It is not about Republican vs Democrat.

It is about removing the absolute worst and most dangerous public official in the history of the United States from the White House.

Trump proves every day he is in office that he is a totally worthless piece of garbage.

Trump is devoid of humanity.  He has never performed a single totally unselfish positive act in his entire adult life.

Trump is totally self-absorbed.  The only thing he cares about is himself, and absolutely nothing else.

Trump is ignorant.  He is a moron.  He doesn’t know his ass from a hole in the ground about anything.  And he has absolutely no interest in learning anything.

Trump lies to every one every day about everything.

Trump is a mentally unstable malignant narcissist and a sociopath.

Trump is not a conservative.

Trump is not a Republican.

Trump is not a Christian.

Trump was not elected President by the American people.  He lost by 3 million votes.

Trump is a cancer.

Trump is an aberration.
Biden is correct – 8 years of Trump will destroy America and how America is viewed by the rest of the world.

For the future of America and the world Trump must go.

Not a lot of BUZZ today – but some BUZZ is better than no BUZZ.

Having trouble with colors - click on the black highlighted text for the link (for some reason not blue today).

“Taxpayers can and do win hobby loss cases and advisers can guide them in going into the game with a winning hand.”

This is true, because a client of mine did win a hobby loss audit many years ago.  It did take a long time for the win to be acknowledged, due to the 7-year rule, and it was partially due to the lucky fact that our auditor was actually very well-informed on the specific alleged “hobby” – barrel racing, which I expect was and still is extremely rare.

“They should start contributing as much as possible to retirement accounts, from 401(k) plans offered by employers, or IRA or Roth IRA accounts.”

“Grads should keep a file of tax-related documents, such as expense receipts and tax statements, so that they are ready for their tax professional when tax time rolls around.”

* “IRS announces tax relief for Oklahoma victims of severe storms, tornadoes, straight-line winds,and flooding.”  The title of the Information Release says it all.

* Attention Tax Pros – have you checked out the June 2019 issue of my free newsletter THE TAX PROFESSIONAL yet?  Feel free to share it with your colleagues and co-workers.

It is impossible to believe that anyone with any intelligence or concern for America would want Trump to return as President in 2020 – regardless of one’s political affiliation or philosophy.

Republicans and real conservatives would obviously want a Republican President – and that is a legitimate position.  But nobody should want Trump to remain as President.

It is vital for Republicans to encourage and support a legitimate primary challenge to Trump.  If the Republican Party is to survive it must abandon and denounce Trump and “Trumpism”.