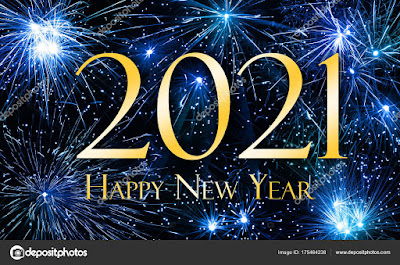 2020 was a year of devastation and despair.  The COVID-19 pandemic affected the life of every single person on the globe.  And Donald T Rump was still President.  The actions of Trump and his Administration exacerbated not only the pandemic but every single problem and issue America faced.
2021 is a year of hope.  Vaccines to combat the virus have been developed, tested and approved and will soon be available to all Americans.  And a new President, the polar opposite of Trump in terms of intelligence, competence, integrity, and humanity, will be inaugurated later this month.  Once again, after 4 years of a national nightmare, a person of honor who cares about something other than himself will occupy the White House – and the damage to American values and democracy done by Trump and his deplorable Administration will begin to be undone.
If things go well in Georgia, despicable McConnell and the Republican Party, which totally abandoned all integrity and credibility, and traditional Republican and conservative beliefs and policies, by embracing and enabling delusional, demented and dangerous Trump, will no longer control the Senate.
And hopefully 2021 will see the investigation, indictment, prosecution, conviction, and sentencing of Trump for his multitude of state and federal crimes.
I look forward to a return to normalcy in 2021 – in our daily life and in the political life of America.
TTFN