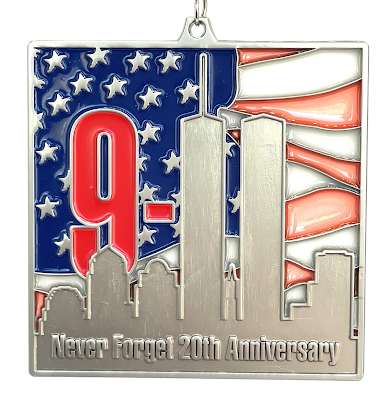 POLICE OFFICER MAURICE BARRY
PATH EMERGENCY SERVICE UNIT
POLICE OFFICER SHIELD #1038
A Port Authority officer for 16 years, Maurice "Moe" Barry, 48, was assigned to the PATH commuter train system. The resident of Rutherford, NJ, upon hearing the reports of the terrorist attacks, was one of the first on scene when he rushed from Jersey City to Lower Manhattan and then into the North Tower to help in the rescue efforts. As thousands fled the searing flames and smoke of the Towers, Officer Barry was attempting to reach trapped and frightened workers on the upper floors. The last time he was seen, he was on his way to the higher floors to get people out.
.
Moe had a history of heroism - he was involved in rescue efforts during an airplane crash at La Guardia airport; he once climbed a bridge to retrieve the body of a person electrocuted there; he was involved in the rescue effort during the 1993 bombing of the World Trade Center; and he rescued a woman from her home, by boat, during Hurricane Floyd. Moe was also a volunteer for the Rutherford Ambulance Corps.
Posted by Robert D Flach