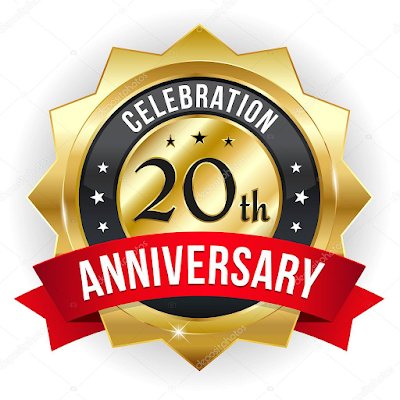 Oi vey!  And OOPS!  The day has come and gone and I forgot to acknowledge it.

The very first post of THE WANDERING TAX PRO was published on Sunday, July 22, 2001.  So, I have been writing TWTP consistently, except for the annual 2½ month tax filing season hiatus, for 20 years.

I first learned about “blogging” at a presentation on “The Future of Easy Web Site Design” by Internet Consultant Lenny Charnoff at the annual National Association of Tax Professionals National Conference in New Orleans on July 13, 2001.

I originally decided to write a blog to provide year-round advice and information to my existing clients and to promote my tax preparation and accounting services. Back then I was still soliciting new clients. I have now officially retired after completing 50 tax seasons (actually I have one more 1040 left to do before it is truly official).

“WELCOME TO THE NEW WEBLOG OF ROBERT D FLACH, THE WANDERING TAX PRO!

+++ The ECONOMIC GROWTH AND TAX RELIEF RECONCILIATION ACT OF 2001, signed into law by President Bush on June 7, 2001, has made Section 529 state college savings plans (named for the section of the Internal Revenue Code) an even better way to save for your child’s education.

Earnings on money invested in Section 529 Plans grow tax-free.  Beginning in 2002, withdrawals from state-sponsored plans will be tax-free is the money is used to pay qualifying college expenses.

+++ I recently returned from the annual conference of the NATIONAL ASSOCIATION OF TAX PROFESSIONALS, held at the Hilton Riverside in New Orleans, where the keynote speaker for the opening session was IRS Commissioner Charles Rossotti

This was the first time I travelled without having a paper airline ticket in advance.  I had no problem at check-in.

As I was walking down Bourbon Street heading for dinner at Tony Moran’s PASTA & VINO, I passed a nude bar where the hostess was offering passers-by the opportunity to “wash the girl of your choice”.  Good clean fun, “Nawlins” style!

While in the Crescent City I saw “CHERRIES JUBILEE”, a delightful comedy written by four local women, at the intimate and very company SOUTHERN REP theatre on the third level of the Shops At Canal Street upscale mall.  The show had the funniest and most innovative way to dress the set between scenes.”

Another 20 years?  Hey, its possible.